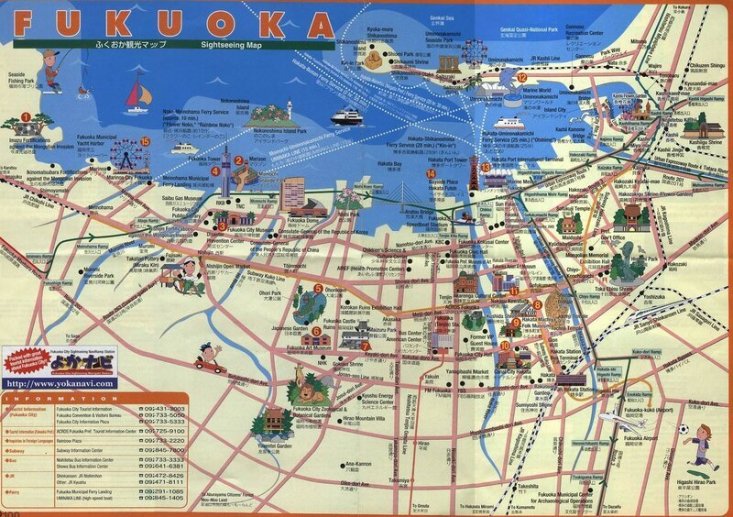 HISTORY OF THE FUKUOKI METRO 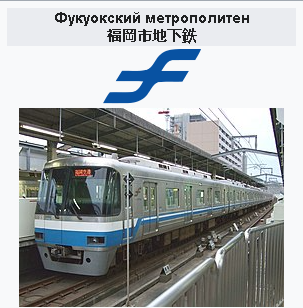 Fukuoka is located in the north of Japan's southernmost island, Kyushu, and has 1.2 million inhabitants. In 1973, the city decided to build a metro system. While all city tram lines were closed in the late 1970s, construction of the metro began in 1975.

Until 2005, the Fukuoka subway network (17.8 km, 19 stations, all underground except Kaizuka and Meinohama) consisted of two lines that share an 8.5 km total stretch between Meinohama and Nakasu-Kawabata (originally built as part of Line 1 only) ... Some trains run west from Meinohama on commuter rail lines (JR-Chikuhi line, 44 km, interval 15-20 minutes).

The lines are operated by the Fukuoka City Transportation Bureau. Unlike most other public operators in Japan, the company only operates subways without any bus lines.

All stations are equipped with automatic platform gates. All lines are automatically operated by ATO system, although drivers are used as a precaution. The lines introduced Hayakaken, a smart card system from March 2009. This superseded the prepaid magnetic card systems.

Fukuoka City Subway employs unique logos (symbol mark and symbol color) for each station, much like Mexico City Metro. For example, Fukuokakūkō Station (Airport), has a logo symbolizing an airplane. Kūkō Line's and Hakozaki Line's symbol mark was designed by Isao Nisijima, Nanakuma Line's by Masayuki Nisijima who is Isao's son which made from Isao's posthumous works.