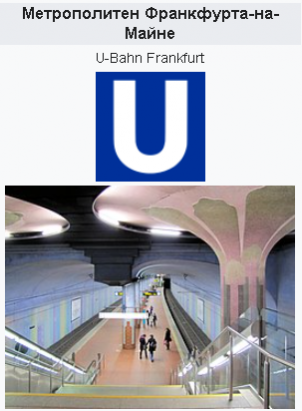 The Frankfurt U-Bahn is a Stadtbahn system serving Frankfurt, Hesse, Germany. Together with the Rhine-Main S-Bahn and the Frankfurt Straßenbahn, it forms the backbone of the public transport system in Frankfurt. Its name derives from the German term for underground, Untergrundbahn. Since 1996, the U-Bahn has been owned and operated by Stadtwerke Verkehrsgesellschaft Frankfurt am Main [de] (VGF), the public transport company of Frankfurt, and is part of the Rhein-Main-Verkehrsverbund (RMV) transit association. The licence contract is up to 31 December 2031 and is renewable. The contracting authority of VGF is the municipal transport company traffiQ.

The U-Bahn opened in 1968, and has been expanded several times. It consists of three inner-city tunnels and above-ground lines in the suburbs. About 59% of the track length is underground.[citation needed] The network operates in a variety of right of ways typical of a light rail system, with above-ground sections operating on street and core sections running underground in the inner city.

Like all public transport lines in Frankfurt, the subway has been part of the tariff zone of the Rhein-Main Verkehrsverbund (RMV) since 1995. From 1974 until the founding of the RMV the Stadtwerke were shareholders in the predecessor group, the Frankfurt Transport Association (FVV).

The network consists of 86 stations on nine lines, with a total length of 64.85 kilometres (40.30 mi). Eight of the nine lines travel through the city center (line U9 being the exception). In 2016, the U-Bahn carried 132.2 million passengers, an average of approximately 361,200 passengers per day. Most recently, on 12 December 2010, two new lines were added, the U8 and the U9, which open up the university campus and the new development area on Riedberg. The subway line U9 is the first line that does not touch the city center.

VGF carries over 160 million passengers annually. To enable them to get information quickly at any time, we have compiled a number of useful passenger information on the following pages.

You can read which social networks we operate on and how you can follow us there.

We have important plans and interesting information on the brochure page for you.

You can make sure that traveling on the Ebbelwei Express and visiting the Transport Museum are not only beneficial for tourists.

And, of course, you have already discovered the practical information module, where we quickly and reliably provide information on deviations from the schedule and provide important information for a smooth journey.

Frankfurt (650,000 inhabitants) is known as the financial capital of Germany. It is the center of a larger metropolis, which includes cities such as Offenbach, Hanau, Wiesbaden (capital of Hesse) and Mainz (capital of Rhineland-Palatinate). It also has one of the busiest airports in Europe. Much of South Hesse is part of the Rhine-Main-Verkehrsverbund.

The Frankfurt U-Bahn is actually a combined system of the full metro and the typical German Stadtbahn (see Stuttgart). There are three main routes, one north-south (with U1, U2, U3), another east-west (U6, U7) and U4 (and U5), which can be considered a complete metro line.

The U-Bahn opened in 1968 and has been expanded several times. It consists of three city tunnels and elevated lines in the suburbs. About 59% of the track length is underground. Surface sections operate to different standards than traditional rapid transit systems, thanks to the independent expansion of the tracks for these sections - they are more like light rail. (Stadtbahn) due to the fact that they are not completely separated by class.